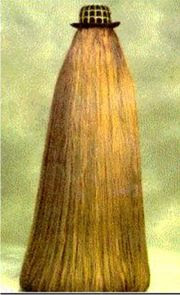 there are some pretty great characters from the original "adam's family" tv show. one of my favorites was always "cousin it." i remember as a kid trying to figure him out..."where's his face?" "how can he see through all that hair?" the questions were endless.
how appropriate that now i am growing my very own "cousin it." that's right, folks, you thought the third boob was enough? nope, now you can add cousin it to the equation. i told you i was good circus material.
i have a dermoid cyst. i know there are tons of other moms out there who have had one and there is tremendous comfort in numbers but still, these little things are pretty disgusting, right friends?
when getting my first ultrasounds for baby #4, the ultrasound technician gave one of those quizzical looks (don't you just love those) and said, "huh...has anyone ever told you there's a cyst on one of your ovaries? no? well, you have one. i'll send the pictures to your doctor." i hate it when they do that. i got all excited to hear about what new thing was ailing me and then i got put on hold until the doctor was available.
once the doctor came in, he told me it was a dermoid cyst. these cysts aren't the kind that might burst and go away. nope, these ones are there for good until they are surgically removed. i was told not to google "dermoid cyst" and sent on my merry way. if i could have googled it in the car on my way home, i would have. once at home with my computer, i quickly learned why i had been forewarned. the images alone were enough to cause a pretty severe gag reflex...especially in the first trimester of pregnancy.
a dermoid cyst can develop on an ovary. somehow, it can crazily be full of hair, teeth, fat tissue, skin, all kinds of creepy goodness. they are little "cousin its." awesome, right? my sister had two...one the size of a grapefruit and one the size of an apple. how'd you like to add those to the family album? mine has stayed small so they just keep monitoring him. i have no idea how big "cousin it" has to grow before they'll take him. i must admit, i'm looking forward to saying goodbye.
i have to say, though, that "cousin it" is a good conversation starter. my friends would wittily ask during my last pregnancy, "how are the twins?" referring to "cousin it" and the baby. so funny, right? somehow during pregnancy, anything that makes you laugh is a pretty awesome thing. so, thanks, "cousin it" for making my pregnancy more memorable. now, if you could just grow another limb or a third boob...anything so you'd be big enough to take you out...that would be awesome too.
Posted by Genelle "Nellie" Billings at 6:00 AM