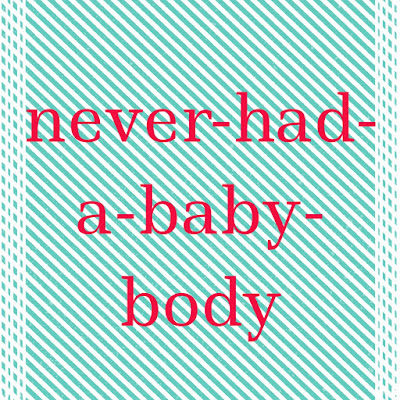 i've decided we need a new word in the english language, or every language for that matter..."never-had-a-baby-body." it's one word, a noun, a pronoun and an adjective and has to be written and said as one word. as soon as you say it, you have a vision in your mind. am i right? you know what i am talking about, bodies that resemble a thirteen year old boy more than a mommy. anyone?


i thought of the word when one of my husband's co-workers showed up at my house to drive with my man out to a town about four hours away to do some interviews. this female co-worker showed up at my house, freshly showered in a trim little outfit and her never-had-a-baby-body (noun), ready to spend the day with my hubby. what made it worse was that my youngest was just a couple of months old, i was still nursing, holding onto pregnancy weight, hadn't showered and was sporting a maternity top because it was the only thing clean. anyone getting the picture? never-had-a-baby-body (pronoun) and my man left for the day and i decided it might be time to wash my hair for his big return that evening.


then, a few weeks ago, i came across a picture of myself on my honeymoon. i couldn't help but wonder, "who's the hot chick in a bikini with my husband?" then i discovered it was just my never-had-a-baby-body (noun) and while it was smokin' back then, it didn't take any work to look like that so i don't have much respect for my former hot self.