if yesterday overwhelmed you, don't worry. today you'll have everything you need to get an army birthday party headed in the right direction.


the party was a series of nine missions. for each mission, the boys were given an envelope with a typed out description of what they were going to do. they then headed out to complete their tasks.

here are the missions in order. 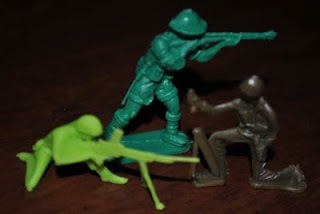 mission #1
OPERATION SOLDIER RETRIEVAL
Your mission, should you choose to accept it, is to find the 300 soldiers who are "mia" (missing in action). these are men who went missing in battle and we cannot leave any man behind. once each soldier has been found, bring them to station one for your next assignment.

i hid three hundred toy army men in the grass in the front yard. the boys had a set amount of time to try to retrieve as many missing soldiers as possible.

between mission one and two, the boys drew ribbons from a bag. i had precut 18 inch long strips of blue and red ribbon. once the boys drew their ribbon colors, they were tied around their arms and they became part of the red or blue companies.


OPERATION SEEK AND FIND
Your mission, should you choose to accept it, is to search with your teammates for the equipment needed to complete the remainder of your missions. each of the items you are seeking are labeled with a red or a blue ribbon. you must only gather the items with your correct team color without revealing the location of the other team's items. attached is a list of the items you will be seeking. bring all of the items to station one.
the boys were given a list of items to find. these items had been hidden in a neighbor's backyard. the items hidden were all things the boys would need for future missions. depending on what you have planned, the items may vary.


for each team we hid one bucket, two water guns, one beach towel, two rolls of toilet paper, a marshmallow launcher, a bat, and flashlights. each item was labeled either blue or red with duct tape.


the boys were taught to march and had to march to the neighbors house and march back with their items in order to receive their next mission. 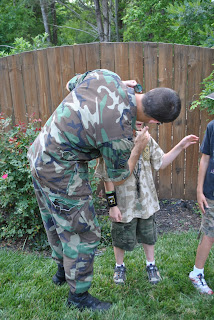 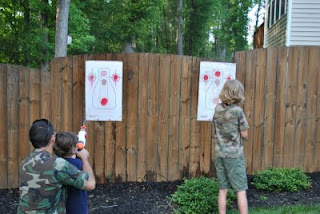 Your mission, should you choose to accept it, is to hit the paper targets as quickly and as accurately as possible with the water guns. your target practice will be timed and the team with the lowest overall time will be honored with a special medal of recognition.
my husband has law enforcement connections so was able to get cardboard targets. you could easily make your own targets for the boys to shoot. we painted washable paint into circles on the targets and then timed each boy to see how long it would take to wash all of the paint away. we had a towel available to wipe the board down before we repainted for the next boy.


OPERATION CONFIDENCE COURSe
Your mission, should you choose to accept it, is to complete the soldier obstacle course in as short a time as possible. you will need to be accurate and quick to finish the mission in time.


my husband had designed an obstacle course for the boys for this next mission. this involved walking along a balance beam (a fallen log), crawling through a tunnel (we used a play one), pulling a weight (a log with a rope tied around it), hitting a target (we had more targets tied to trees and the boys had to throw grenade water balloons at the targets), push-ups, and lots of running.


this mission takes a little bit of preparation. you'll need a two-foot piece of 1/2 inch pvc pipe, a 1/2 inch to 1 inch connector and a 1 inch fitting of pvc pipe. these will all fit easily together. for the mission, a large marshmallow is placed in the 1-inch fitting and then blown out of the tube. they don't shoot far so we took higher ground and make the boys stand below. they loved this and each boy managed to catch a marshmallow in his mouth before the mission was over. 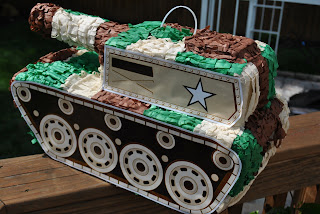 Your mission, should you choose to accept it, is to work together to destroy an enemy tank that has been spotted on the premises. all of the spoils found inside the tank are yours as a reward for the completion of this mission.

we found a piñata online that was shaped like a tank. this worked perfectly for our enemy tank and the boys used the bats they had found earlier to destroy the tank.

Your mission, should you choose to accept it, save your fellow soldiers who have been wounded in battle. You will need to dress their wounds and carry them on a stretcher. Follow the instructions of commander "last name" if you wish to succeed.

for this mission, the boys had to work in teams. one team member would lay wounded on the beach towel. the other team members had to bandage their wounds with toilet paper. the team would then work together to carry the wounded soldier back to their camp. the boys loved this one and each wanted a chance to play the part of the wounded person.

Your mission, should you choose to accept it, is to sing in a loud voice the "Happy Birthday" song to PFC "name". Upon completion of this mission, you will be rewarded with rations. 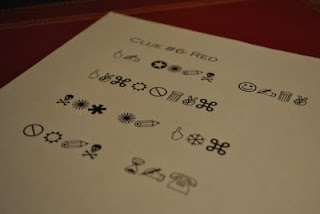 OPERATION TREASURE HUNT
This is your final mission of the night. Your mission, should you choose to accept it, is to find the treasure hidden for each team. You must work with your team to decode the message found in each location in order to arrive at your final treasure. Once you have found this treasure, your missions will be complete and you will be rewarded with rations.
we had various clues hidden in envelopes around the yard. it was dark at this time so the boys had to find all of their clues with their flashlights. each clue was written in code and the boys had to decipher the message to find their next hidden clue. the final treasure was an envelope full of certificates of "mission completion". these were buried in the sandbox.
NOTICE OF COMPLETION
THE PRESIDENT OF THE UNITED STATES
MAY 27, 2011
IT IS HEREBY DECLARED THAT THE SOLDIERS OF THE "LAST NAME" COMPANY HAVE SUCCESSFULLY COMPLETED THEIR THIS FRIDAY, THE 27TH DAY OF MAY IN THE YEAR TWO THOUSAND ELEVEN.

THE MEN OF THE BLUE AND RED TEAMS EACH PERFORMED THEIR TASKS WITH HONOR AND DEDICATION. YOU PRIVATES SHOULD BE PROUD OF ALL YOU HAVE ACCOMPLISHED. YOU ARE HEROS ON THIS DAY.

ACCEPT THESE GIFTS AS A TOKEN OF REMEMBERANCE. EACH TIME YOU SEE THESE, MAY YOU REMEMBER A JOB WELL DONE. YOU SERVED YOUR FELLOW SOLDIERS WELL AND THIS DAY WILL LIVE ON IN OUR HEARTS FOR YEARS TO COME.

WELL DONE, SOLDIERS. WE SALUTE YOU.

one of the best things we did in preparation for this party was to visit the local recruiting offices for the various branches of the armed forces. the men and women there were extremely helpful and showered us with gifts for all the boys. we ended up with a ball, a pen, a travel mug, a lanyard, and a sticker for each boy to take home. we were also supplied with cups, posters, wrist bands and large bags. each boy received a bag with his items from the recruiting offices as well as his flashlight, the candy from the piñata, and a dog tag we had ordered for each boy. 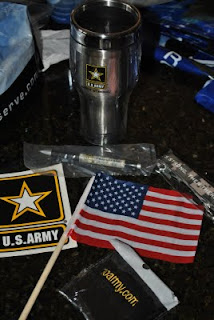 that's it! even if this isn't the perfect birthday party idea for your family, hopefully you can use it as some inspiration for a party of your own. there are so many great ideas out there and so many amazing moms who have done it before us. thanks so much to all those who gave me ideas for this party. i couldn't have done it without you.
Posted by Genelle "Nellie" Billings at 6:41 AM