the third boob...or the day i became every man's fantasy 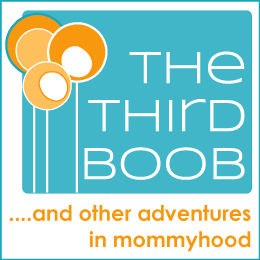 there are some stories that never get old. for those of you who may not have heard the story that began this crazy journey, this is for you.

the first pregnancy is the most exciting. that's not to say that other pregnancies aren't full of wonder but the first one is full of all things new. every change is a new experience and the unknown helps to add to the thrill of it all. i was like a lot of first time pregnant moms. i enjoyed that first pregnancy...until i noticed a kiwi sized lump growing in my armpit. the worst of scenarios raced through my mind. did i have cancer? was this a tumor? when the doctor ordered an ultrasound of the lump, i was thinking the worst.


finally a lactation consultant friend of mine told me it could be an extra mammary gland. this was confirmed in the hospital after i gave birth to my first son. a second lactation consultant came in to check on the nursing situation and i blurted out, "i think i have a third boob." to this, in the tradition of lactation consultants getting all up in your boob business, she peeled back my hospital gown to examine the said appendage. here's where it gets good. this lady had all the good information. apparently, your milk lines run from your armpit all the way down your abdomen (think a cat or a dog with a litter of puppies). you can be born with extra mammary glands or extra nipples anywhere along your milk line and, unless you have a visible nipple, you may not know it's even there until your breasts swell during pregnancy. the consultant then proceeded to tell me that there was a woman in the hospital the day before with eight boobs. (i can hear the collective gasps through the computer.) i all of a sudden felt pretty happy just to have the one. she then continued by saying that it would go away after nursing and that, because there was no visible nipple, it would dry up and shrink back to its former undetectable size.


here is where she got it wrong. my milk finally came in for my first born and while i was nursing him, i asked my husband if he'd turn up the air conditioning because i felt like i was sweating profusely. i then looked down to see that no, i wasn't sweating. what i thought had been the tiniest of brown freckles was instead a nipple that was currently dripping milk down into a puddle on my shirt. yep...sign me up for the circus people. not only do i have a third boob but it lactates. lac. tates.


i had to nurse with a towel in my armpit and while most nursing moms got to walk around with just absorbent breast pads in their nursing bras, i got to do that and wear a huge band-aid on my armpit. just so we're all aware here, my son was born in june...tank top weather. fabulous.


so, there you have it. i think the third boob can give everyone a brighter outlook on life and on their after-baby bodies. your stomach may look like a venetian blind from the stretch marks you earned or you may have skin that now somehow resembles an elephant's trunk. still, looking in the mirror at yourself you can always say, "at least it doesn't lactate." so, here's to you, third boob. thanks for making most of the world feel a little bit better about themselves...and for giving us a great story to tell. cheers!
Posted by Unknown at 7:44 PM